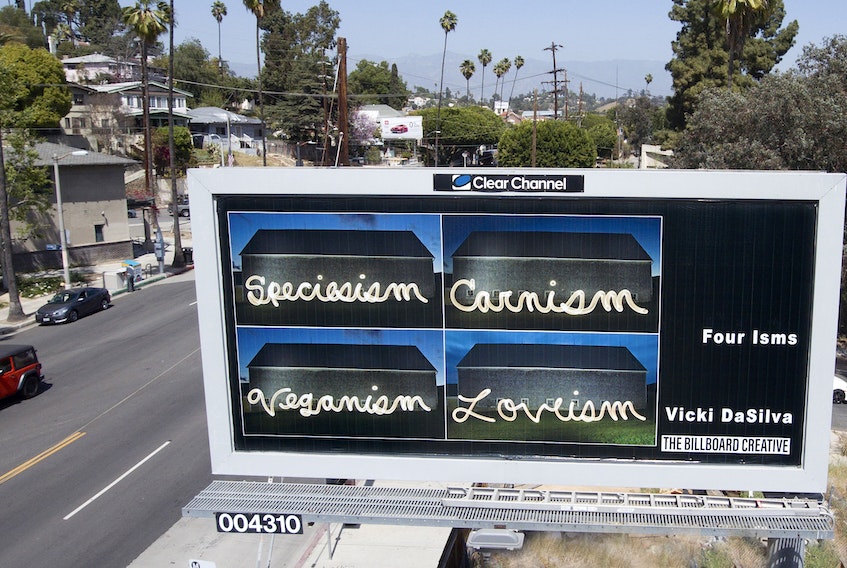 This is the billboard in Los Angeles that features the work, “Four Isms” by Inverness artist Vicki DaSilva. DaSilva is one of 30 North American artists chosen to have their art featured on billboards in the U.S. city. The barn shown in each of the four photos is located in Mabou. CONTRIBUTED

Armed with light, Vicki DaSilva creates visual masterpieces out of the darkness that surrounds us.

Whether it’s a ribbon wrapping around a well-known building or site or a pertinent message from the day’s news, DaSilva’s work incorporates art, performance and activism that’s getting noticed around the world.

Her latest accomplishment is having her piece, “Four Isms,” chosen for inclusion in this year’s L.A. Billboard Creative Project. “Four Isms” will be shown on a billboard in the city until the end of April and is something she’s been trying to achieve for a while.

“I got lucky with that billboard — I’ve been applying to that (competition) for a few years so that was something that I always wanted to do,” she says. “Almost 10 years ago in 2012, I won a big competition in New York called Art Takes Time Square which had my work all over the 13 digital billboards of Time Square so billboards and me kinda click.

“I’m also having a solo show in Halifax at Studio 21 Gallery in October.”

Although born in 1960 in Bethesda, Md., DaSilva has been coming to Inverness since 2004 and in 2018, she moved here permanently with her husband, Antonio, an electrician.

“It feels like we’ve been here much longer and it’s great,” she said in a recent phone interview. “My family was calling me the accidental clairvoyant. Between Trump and COVID, we just managed to get out and get going before it all went down.”

Just before she left the U.S. permanently, she got permission to do some light paintings in front of the White House.

“I had to get Secret Service clearance and a permit from the city of (Washington) D.C. because you can’t even set up a tripod in front of the White House where tourists gather,” she says. “I spent two nights there — it was a bit of art therapy for me after Trump got elected.”

When Secret Service personnel asked to see what she was doing, she showed them.

“They laughed, they weren’t angry,” she said about the photographs which featured words like sad that expressed how she felt about Trump and his policies.

DaSilva began making time exposure photographs in 1980 during her studies at Kutztown University of Pennsylvania. After graduating with her BFA in 1983, she moved to New York City and considered becoming a graffiti artist but found herself drawn to light painting instead.

Although not as well known as other mediums, artists as famed as Picasso have tried their hand at this art form. DaSilva uses long-exposure photography to generate images and then “paints” them with a variety of fluorescent lamps, creating a relationship between time, movement and light. It’s a combination of public art, performance and creation without being invasive or leaving any physical trace. It should also be noted that she doesn’t use Photoshop or video manipulation to achieve her shots — everything happens within the camera. In the videos that accompany her photographs, she can be seen moving quickly waving long tubes of fluorescent light to create the long-exposure photographs and videos.

In “Four Isms,” DaSilva features light-painted words on an abandoned barn in Mabou. The words are Speciesism, Carnism, Veganism and Lovism, words that have become important to her since she became a vegan in January 2020.

“When you become vegan, a lot changes,” she says. “My goal with this series was to reflect in a very simplified way how that these four words were very integral to my education of veganism. It’s almost a flow chart — one leads to another. It’s all about the animals. The fact we don’t have the right to commodify them.”

Elizabeth Patterson is a culture and health reporter at the Cape Breton Post.